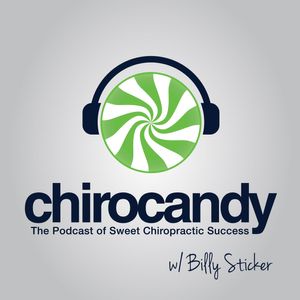 This is a training Billy did recently sharing the top campaigns for the highest ROI that you should be running fo your office. To watch the video training go to chirocandymarketing.com/topfive.

Be sure to check out Ryan's Podcast: The Expect Awesome Podcast

145: How to Succeed with Facebook Marketing Series Part 2 – with Billy Sticker

After working with over 400 chiropractic offices worldwide, we have developed a system that has a 95% success rate with generating high-quality new clients. chirocandymarketing.com/tribe

Dr. Alok Trivedi is an expert in the field of performance. He has been featured on CBS, NBC, Fox News, CTV News Canada, FHM, Global News and many more. After building one of the largest healthcare clinics in the world seeing over 1200 patient visits a week he went on to develop Aligned Performance Institute. API clients include Mobiroo, Draftmoore North America, UPS and Primerica. He has shared the stages with legends in the personal development industry ranging from Bob Proctor(From the movie The Secret), Brian Tracy, Don Yaeger, Steve Siebold and Grant Cardone.

142: How to Succeed with Facebook Marketing Series Part 1 - with Billy Sticker

140: If You Suck at Selling This Will Help with Billy Sticker

Do you LOVE the idea of having a business... But you struggle with the “selling” part? We all sell every day. In our marketing... In our Day 1 and Day 2s... In the Report of Findings... Health Talks... Keeping patients... And more... It can be discouraging, and this where so many entrepreneurs get STUCK and stop... So when I heard about the guy who sold $3 Million in 90 minutes by doing ONE presentation and became the world’s highest-paid speaker, I just knew I had to find out more... Talk about a SKILL, right? When I realized he was selling his SECRETS on how to become an incredible speaker and seller, using the same process and script that he uses to sell MILLIONS with one speech - I knew I wanted to get in on it! And I wanted to make sure to share it with you, too... This is the link I used where he was selling his ‘speaking & selling’ secrets... chirocandy.com/10xsecrets

139: 3 Reasons Facebook Ads Are Not Working with Billy Sticker

Welcome back to another episode of Chiro Candy. I've got to tell you guys, this has en a little bit bittersweet. I've really missed doing these episodes, and at the same time, I have not, if that makes sense. For several years we did these every Tuesday, 5:00 AM Central Time a new episode came out. And I was unbelievably consistent with getting these done. And as our business started growing, and we got more and more clients, and the stress of just life, and work, and stuff began to add up. My wife would ask, what are some things that are stressing you out? And one was checking email. And she's like, well, look, why don't you have Renee do that? Which is one of our team members that helps out on the Facebook side of things. So she really became my assistant. Not only does she work in the Facebook side of the business, but she started checking my emails, and organizing that, and letting me know, hey, which ones I need to respond to, and so on and so forth. And that really helped. But we went, in January of this past year, of 2018, which is the same month we did the ChiroCandy Cruise, we were at about 60 offices we were working with doing Facebook.

That's not including all the offices, and doctors that we help write books and stuff for. But just the Facebook side of things, now we're well over 100 offices we're working with. And that happened in just a matter of months, we just doubled in size. And we hired a lot of new staff, and got our staff trained, and everybody's here local. We don't have anybody in India doing this. As a matter of fact, it's a lot of people we go to church with that work in the business with us now. So anyway, we worked on our systems, and our processes, and getting everything right. But I kind of gave myself permission to take a step back from doing the podcast. And I've got to tell you, for me, and this is a little bit selfish, but it was a nice break. It felt good. And we also had some issues. I don't know if some of you guys who listen to the show for a while may notice that we had some issues with the mic. I'd have people email me saying, oh my goodness, your last episode from 13 minutes to 16 minutes, your audio went almost completely silent. I mean, just issues like this.

And so, I'd replace the mic, and then the other mic was having issues, and it was just a stress point in my life that I was like, you know what? I'm giving myself permission to just not do this for a while. And then I've been traveling, speaking at different events, and it really has been great. People coming up to me saying, hey, what's going on? I miss the show. And even some big name influencers in the profession saying, Billy, dude, what's going on? Where's ChiroCandy? And so, we had last week's episode with Tabor, which the first episode we've done in quite some time. And so, now we're back. We are going to start doing these more regularly. And I even have a new podcast that I'm going to be starting, that I'm really excited about also. It's going to be a totally different genre, if you will. It's going to be called, The Blessed Entrepreneur. And it's going to be about, God wants us blessed to be a blessing. And the purpose of wealth is to help spread the gospel, and some really cool stuff we're going to be going over. But it's going to be more of an entrepreneur, internet marketing type podcast with a tilt on scripture. And not at all trying to use God to sell anything. That's not it.

It's more this mind set that some people have that you're supposed to be poor. That money is evil, and that's not the case at all. You can bless a lot more people when you have money, you can make a greater impact in the world when you have money. But you do that by serving as many people as you can. So anyway, that's going to be another podcast we're going to be doing here, launching really, really soon. So I'm excited about that. We're actually working on the website and stuff right now. But in this episode of ChiroCandy, let's go ahead and get into some meat. Some of the meat and potatoes. One of the things that I've noticed is, some of our most popular episodes are the ones where we talk about directly some tools when it comes to Facebook marketing, and what's working, and what's not working. And today we're going to cover three things, or three reasons that your Facebook ads are not working. Or whenever we talk to offices, and they're like, look, we tried this before, and Facebook just doesn't work. Well, we see the same things over, and over, and over again. And basically it comes down to these three things. The first one, whenever somebody says their Facebook is just not working. And whenever we say Facebook, we include Instagram in that as well.

When they say their marketing efforts just aren't working, it's because number one, there's no consistency. And I like to relate this to go into the gym. Or even in your diet and nutrition. All ri...

148: Can This Software Replace Your CA?

Today we visit with the creator of SKED, a revolutionary software that is transforming how offices and patients schedule appoints and more.