Welcome to On Cue Chris Costello. My Dad, Lou Costello, of the popular comedy team Abbott and Costello, was not only a comic, but a humanitarian who loved helping people. He was a sincere advocate when it came to helping others, and to be there for people who wanted to make a positive difference in our world. I guess you might say, his passion has been passed on to me. I invite you to come and listen, as I talk with people who are making an imprint in our world. People such as Elizabeth Beisel, a 3x Olympian and 2x Olympic medalist who is paying it forward; Francis Gary Powers Jr., the son of U2 pilot Francis Gary Powers whose U2 spy plane was shot down over the Soviet Union in 1960, and so many others. We have some amazing people, all sharing their equally amazing stories. Please join me on, On Cue Chris Costello http://chrisoncue.buzzsprout.com
...more 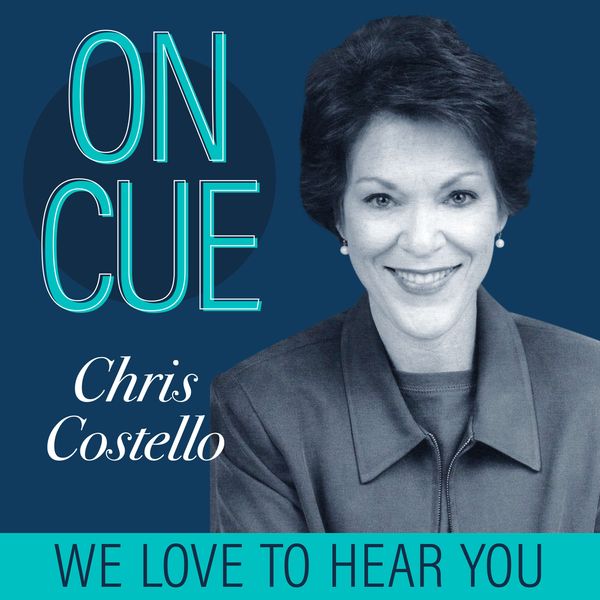 An Olympian and a Concert Violinist - Meet Elizabeth Beisel!

Olympian Elizabeth Beisel talks about her challenges of being one of the youngest Olympian's ever to compete. She is driven by her desire to win, and her passion in giving back. What centers her? It's playing the violin!

Vaudeville, born in France, raised in New York. From the saloon halls, to the Palace Theater, who were the immigrants that shaped Vaudeville's legacy, changing the face of entertainment forever? Historian Rob Snyder draws back the curtain to reveal Vaudeville's rich history.

The Kiss That Silenced A War

The Sailor and the Nurse. The timeless, iconic photo taken in New York City's Times Square, the day WWII ended. But who were these two people, and how were they identified? Author Larry Verria uncovers decades of mystery with our host, Chris Costello.

The United States and The Soviet Union. Chris talks with Francis Gary Powers, Jr. and Sergei Khrushchev, sons of two iconic and historical figures of the Cold War. What was it like knowing the world was watching every move their dads made? In this historical podcast, Chris also opens up the discussion to today's students.

Lt Col. Nicola "Rogue" Polidor, the first female pilot to fly the B-2 Spirit Stealth Bomber over the Rose Parade, talks about her dreams, her challenges, and about making history!

We take a fascinating look into a family dynasty. Lon Chaney, "The Man of a Thousand Faces." Also his son, Lon Chaney Jr., who became an iconic legend portraying the Wolf Man. Join us, as we talk with grandson Ron Chaney, who shares an unusual glimpse into the golden-age of horror films, and the Chaney family dynasty.

Kate Smith, first lady of radio, and our Nation's most beloved patriot. Join Kate's niece Suzy Andron and her husband Bob, as they take us on a behind-the-scenes journey into this amazing woman's life, in front of, and away from the microphone.

At The Sound Of The Tone - Making Time With Jane Barbe

A familiar voice to millions across America. Jane Barbe gave us the time, the weather, hotel wake-up calls, and iconic radio and TV commercials. Join us as we talk with her son, David Barbe, who shares his mother's incredible journey as, "The Time Lady."

The Catskills - It's History and How It Changed America

The lure, the history, the love of the Catskills. Join renowned author Stephen M. Silverman as he takes un on a larger-than-life journey into this remote mountainous area, 100 miles northwest of New York City.

Surfs Up! Meet The Real Gidget!

Kathy Kohner Zuckerman, the real-life GIDGET. Her story ignited a surfing sub-culture in America and Gidget mania around the world. (Spoil alert: With a special surprise guest!)