Culture CapsulesTM with Mr. Wendell - Where the MegaStars Meet the MetaVerse. Mr. Wendell is an influential music manager/tour manager for major artists such as Lil Wayne, Drake, Justin Bieber, New Edition, Jay-Z, Cash Money, and many others. Culture CapsulesTM with Mr. Wendell features an innovative and immersive new genre of podcasting bringing A-List talent together for exclusive technology drops, spotlights on their catalog as collectors, talks about NFTS and the crypto-verse, and integrated commerce via simulcasts on Talkshoplive® and all major podcast platforms. Celebrity guests to include Rick Ross, T.I., Lil Twist and many others.Mr. Wendell has 25+ years of experience organizing and leading domestic/international tours for many of today’s biggest music stars. Mr. Wendell has now taken his genius to the tech world, where he is Co-Founder and Head of Studio for SDK Culture. Guests of Season One will receive commemorative First Run MetaZERO phones certified via an NFT minted on Cardano. MetaZERO is a secure mobile device that enables Zero SIM-jacking, Zero attack on voice and messaging, and Zero attack on filesharing/ photo storage -- all of which allows customers to maintain their privacy while enabling best-in-class secure communications within their social circle.
...more 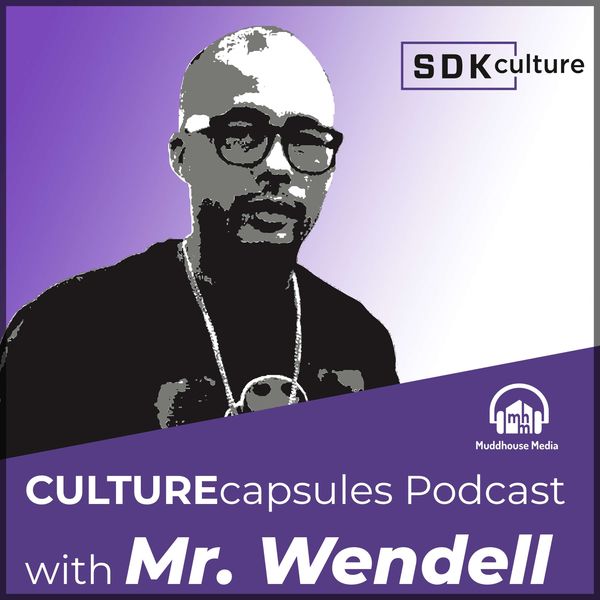 What is the Blockchain, how does it work, and why do you need to know? Mr. Wendell and Ron Baptiste explain the platform in depth.

Before you jump into the metaverse you have to have some sort of NFT (Non-fungible token). Before you obtain an NFT you have to own some type of cryptocurrency to obtain the NFT. That cryptocurrency sits on top of the computer network data base called The Blockchain. Mr. Wendell and Ron break it all down on this episode of Culture Capsules.

'The Digital Diva' Ruth McCartney started her first database as fan club manager of her step brother Paul's band The Beatles. After helping create the first band websites in the 90's, find out why she's 'all in' on the Metaverse.

In this episode Mr. Wendell and Ron Baptiste speak with Ruth McCartney of McCartney Multimedia, early pioneers in the online world since 1994. But Ruth's beginnings as a database manager go back to the 60's, as a fan club manager of her step brother Paul's band The Beatles. It's where she first learned about the importance of connectivity between people from different parts of the world.
'The Digital Diva', Ruth was also part of the team that created the very first websites for bands and other talent in the 90's, when people would ask "What is a Web-SIDE"? She's currently 'all in' on the metaverse and NFTs, and is currently a part of Gourmetnft.com, which has amassed the largest number of chef's recipes in the digital collectibles space.
Hear about her amazing journey and her positive forward thinking, and find out what aftermathislands.io is too!

Mr. Wendell buys a "Budverse" Budweiser NFT during this show, after his 'partner in crypto' Ron Baptiste tells him that he missed the drop. Find out if it was a wise purchase, while Wendell and Ron explain how to get started buying NFTs today!

In this episode of Culture Capsules, Mr. Wendell is joined by his 'partner in crypto' Ron Baptiste, Chief Content Officer and Co-Founder of SDK Co. After hearing from Ron that he missed the 'drop' for the new Budweiser 'Budverse' NFTs, Wendell buys one during the show. This prompts them to talk about the steps of how to set up a wallet and purchase NFTs.
They also discuss the recent Michael Jordan NFT drop (Six Rings Collection). While the team and utility looked good at first, the reveal and focus led to a quick price drop. They talk about the need to connect with the NFT community for a successful drop.
They also cover the forthcoming Government regulations on digital money and possible implications of a 'FedCoin'.

In this episode Mr. Wendell talks to former TV host (CNBC, Fox Business), investor, analyst, economist, and hedge fund manager Cody Willard about his new endeavor SKTLs Space Crypto. SKTLs will help to clear the way for the space revolution with a new incentive system of social good through profit motive.
Cory also shares his reasons for being 'bearish' on crypto and NFT investing at the moment. Considering he bought into Apple at .20c a share long ago, this is advice you probably want to hear!

Episode 15 - Culture Capsules: Mr. Wendell talks with Alex Dixon, CEO of Q Casino in Dubuque Iowa, one of only two non-profit casinos in the USA, and one of the "100 Most Influential People in Las Vegas".

How did Alex Dixon go from working for Goldman Sachs in the Mergers and Acquisitions Department to the CEO of one of only two casinos in the United States that run as a non-profit? Hear about his amazing journey as the first in his family "to reap the benefits of the country his family helped build". He sees more non-profit casino models being built to help regenerate areas and cities all over the country.
Mr. Wendell and Alex also talk about the possibilities, hurdles, and opportunities for casinos in the meta-verse in the future. Alex also talks about his role in the $7.5 billion acquisition of Pixar by Disney!

Rashad Jennings has quite a resume, and he talks about his path from sports (NFL running back), to writing (NY Times Best Selling Author), to TV (Dancing With The Stars champion!), to Esports gaming entrepreneur (Nevahlost), to working in the non-profit space as a children's literacy advocate. Listen to Mr. Wendell explain NFTs and how they will affect Rashad, and all of us, in the future. Mr. Wendell tells us it's still early enough to get involved, understand, and gain knowledge of the new tech, you just have to get in the water!
Hear how a challenge from his nephew to play a video game opened up a new world of connection and community for Rashad in the gaming world.

Mr. Wendell talks about the future of the Metaverse with Marina Worre, Founder and CEO of Worre Studios in Las Vegas. Worre studios is a 25,000 square foot state of the art production studio used to produce the ultimate interactive online virtual experiences.
Marina had a very strong support staff as a child, learning she could accomplish anything. She talks about how a bad relationship tore down some of her self confidence, and that it took almost ten years to build it back up. She now considers herself a "creative hurricane" that looks to empower as many women as possible to lead their 'dream life'. She explains anything is possible, you just have to work hard for it. She inspires, infects, and excites everyone around her to work hard, and Mr. Wendell explains why he thinks Worre Studios will help shape what the meta verse looks like in the next 5-10 years.

In Dallas, Texas at a rap show many years ago, a brash young rapper asked Mr. Wendell if he could get on stage 'if nobody shows up for their slot'. At first Mr. Wendell said no, but then took a chance on the young kid. That kid was Lil Twist, that performance legendary, and their amazing friendship and collaboration has continued to this day. Hear about the friends love of "Pops" collectibles and the meta-verse, while Mr. Wendell gets Lil Twist excited about the possibilties of crypto and NFT's.
In 2003, ten-year-old Texas native Christopher Moore, under the name Lil Twist, scored a Dallas-area pop-rap hit with "Texas Twist." The performing name stuck, though a couple years passed before Moore's career advanced farther, when he sought out Lil Wayne at a concert and impressed the multi-platinum rapper enough to become his protégé. Signed to Wayne's Young Money label in early 2010, Moore debuted there with "The Leak," featuring Wayne, which became his first single to reach Billboard's Hot R&B/Hip-Hop Songs chart. The following year, XXL magazine featured Moore in their annual Freshman Class feature, and he issued a second charting single with another assist from Wayne, "Love Affair." "Turn't Up," featuring Busta Rhymes, charted in 2012, but Moore's debut album, Don't Get It Twisted, never materialized. Throughout the next few years, Moore recorded with the likes of Mindless Behavior and Soulja Boy, appeared on the Young Money compilation Rise of an Empire, and continued to release mixtapes. At the end of 2018, Moore joined Vh1’s Growing Up Hip Hop where he continues to publicly grow his brand.

Culture Capsules is now We The Culture

We The Culture delivers straight talk and education about NFTs, Crypto, Blockchain, Web 3.0, and the Metaverse. Hosted by Mr. Wendell, who achieved great success in hip-hop/music circles as Cash Money tour manager (Lil Wayne, Drake, Nicki Minaj), and worked live events/concerts all over the world with Justin Bieber, Jay-Z, New Edition, Puff Daddy, and many others; and Ron Baptiste, brand management and marketing executive who rolled out marketing activations for Lil Wayne, Tommy and Andy Hilfiger, and many others. Both have extensive Film/TV credits as well, including The Walking Dead and Stranger Things.
Together these entrepreneurs joined forces to create We The Culture, a tech company that specializes in Web3, NFTs, and Metaverse development.
Have questions about these spaces? You're in the right place! This is We The Culture.