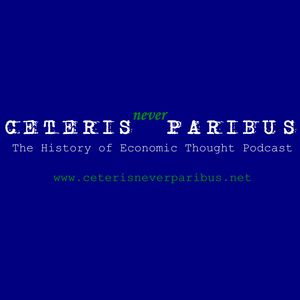 The United Nations Sustainable Development Goal No. 1: End poverty in all its forms everywhere Source: https://www.un.org/sustainabledevelopment/poverty/ In this episode, Maria Bach explores how poverty has been defined and measured over time inspired by her work with Mary Morgan recently published in the History of Political Economy Journal (https://read.dukeupress.edu/hope/issue/50/S1) The episode features notably Amartya Sen, Frances Stewart, Stephen Marglin and Mary Morgan. Here is a list of the books, websites and articles mentioned in the episode:1. GSDRC's definition of poverty2. UNESCO's definition of poverty3. The Economist's article on defining poverty4. Poverty and Social Exclusion Project based in the UK5. Jean Dreze and Amartya Sen's An Uncertain Glory, 20136. Howard Glennerster, John Hills, David Pichaud and Jo Webb's One Hundred Years of Poverty and Policy, 20047. Seebohm Rowntree's Poverty: A Study of Town Life, 19088. The New York Times article on How to define poverty? by Louis Uchitelle, 20019. The UN Intellectual History Project10. The IMF and World Bank's Poverty Reduction Strategy Papers (PRSPs)11. Frances Stewart and Michael Wang's working paper on Do PRSPs empower poor countries and disempower the World Bank, or is it the other way round?

The book that never gets old, Episode 15 with Tiago Mata

Presenters: Christina Laskaridis of SOAS University and Tiago Mata of UCLProduced and edited by Maria Bach, Assistant Professor at the American University of Paris In this episode, Christina and Tiago discuss Eric Roll’s book on the History of Economic Thought. A popular history that circulates in many editions and languages, Christina and Tiago explore the book's making and the reasons for its success. The episode focuses on biographical aspects of Eric Roll, on the book's critical reception and evolving structure. Tiago Mata is a Lecturer in the Department of Science and Technology Studies at University College London. Tiago has dedicated himself to the study of “Economics in the Public Sphere”, leading a team of scholars in researching the communication of economic knowledge since 1945. He has worked on political movements in economics, in particular the resurgence of the Left in 1960s and 1970s North America and how it enacted new ways to think the economy, expertise and social justice. He has also worked on the communication of economic knowledge and statistics and the development of business magazines and how they straddle the worlds of print and management, accommodating transformations in American corporate capitalism. Besides these topics, he also works on social science methodology and the funding regimes of the social sciences. Christina Laskaridis co-hosts the Ceteris Never Paribus podcast, is a PhD candidate at the School of Oriental and African Studies and a former research fellow at the Center for the History of Political Economy. We would like to thank to Laura Comicini for the clip in Italian, Roger Backhouse and Keith Tribe for sharing his interview with Eric Roll with us. This episode makes use of the British Library’s Sounds Collection, and the Oral History recording with Eric Roll.

Guest: Maria Bach, The American University of ParisHosted and produced by Reinhard Schumacher In this episode, Reinhard talks with Maria Bach about her PhD thesis Redefining universal development from and at the margins: Indian Economics’ contribution to development discourse, 1870-1905. We discuss her interest in Indian economic thought, her methodological approach of Positive Discourse Analysis, the development of the Indian economy and of Indian economics in the second half of the 19th century. Maria describes how Indian Economics was influenced by the Indian economic experience and the policy they recommended for Indian development. A focus in the discussion is on the distinct concept of development, which Indian economists developed. In Maria's thesis, she focuses on three Indian economists: Dadabhai Naoroji, Mahadev Govind Ranade, and Romesh Chunder Dutt. They are also the main protagonists in our discussion. Maria Bach is an Assistant Professor in the Economics Department at the American University of Paris. She has recently finished her PhD at King’s College London in International Political Economy. In her thesis, she analyses how Indian Political Economists constructed an idea of development at the turn of the 19th century. Before starting her PhD, Maria was a consultant at the Organisation for Economic Cooperation and Development (OECD) in Paris working on a project entitled New Approaches to Economic Challenges. Maria completed her MSc in Development Economics in 2012 at the School of Oriental and African Studies (SOAS) and her BA in International Economics and Applied Mathematics at the American University of Paris in 2011. And Maria is a co-host of Ceteris Never Paribus: The History of Economic Thought Podcast. An article based on some of her Phd research has been published in the European Journal of the History of Economic Thought (EJHET): What laws determine progress? An Indian contribution to the idea of progress based on Mahadev Govind Ranade's works, 1870–1901

Guest: Peter BoettkeHosted and produced by Erwin Dekker and Reinhard Schumacher In this episode Erwin and Reinhard talk with Peter Boettke about his new book on Hayek, F.A. Hayek: Economics, Political Economy and Social Philosophy, published with Palgrave Macmillan. We discuss the various stages in Hayek’s work, Hayek’s relation to neoliberalism, Pete’s contra-Whig methodology for the history of economics (with a hat tip to Kenneth Boulding), Hayek’s relation to the Scottish Enlightenment, what it means to be an epistemic institutionalist, and the extent to which there was continuity between the early neoclassicals and the Austrian School. As well as many other subjects related to Hayek, and what a Hayekian research program looks like. Peter Boettke is Director of the F. A. Hayek Program for Advanced Study in Philosophy, Politics, and Economics, as well as the BB&amp;T Professor for the Study of Capitalism at the Mercatus Center at George Mason University, and a University Professor of Economics and Philosophy at George Mason University. He blogs at coordinationproblem.org.

Adam Leeds on the Development of Soviet and Russian Economics, Episode 12

Guest: Adam LeedsHosted and produced by Reinhard Schumacher In this episode, Adam Leeds talks with Reinhard about his thesis “Spectral Liberalism: On the Subject of Political Economy in Moscow”, for which Adam won the 2018 “Joseph Dorfman Best Dissertation Prize” awarded by the History of Economics Society. We talk about the development of Soviet and Russian economics and its relationship with politics starting from the late tsarist era, the Soviet Union under first Lenin and Stalin, the post-Stalin era, Gorbachev’s reforms, ending with the development in the 1990s and early 2000s. The topics we discuss include Adam’s research approach of oral history, methodological issues about conducting interviews in Russia, and the relationship between anthropology and the history of economic thought. Adam is an anthropologist (with an interest in the history of economics) and an assistant professor at Department of Slavic Languages at Columbia University.

Irwin Collier on Economics in the Rear-View Mirror, Episode 10

Guest: Irwin Collier, Free University of Berlin Hosted and produced by Reinhard Schumacher In this episode Irwin Collier, professor of Economics at the John-F.-Kennedy Institute for North American Studies at the Free University of Berlin, talks about his project Economics in the Rear-View Mirror, which recently celebrated its third anniversary. On his website, Irwin is collecting and making available teaching resources used in economics programmes at US universities. These resources include syllabi, exams, and lecture notes. His project is covering the period from roughly 1870 – 1970. So far, the website features more than 750 artefacts, including documents from Joseph Schumpeter, Paul Samuelson, Robert Solow, Frank Knight, and many more well-known and lesser-known economists. Irwin’s website is a treasure for historians of economics, and a treasure that is still growing. The interview covers the motivation and aim of the project, some technical and archival topics, as well as some lessons on the development of economics from 1870–1970 that can be drawn from the project so far.

Erwin Dekker on the Viennese Students of Civilization, Episode 9

Guest: Erwin Dekker, Erasmus University RotterdamHosted and produced by Reinhard Schumacher In this episode, Erwin Dekker talks about his book The Viennese Students of Civilization: The Meaning and Context of Austrian Economics Reconsidered. We discuss Erwin’s cultural approach to the history of economic thought in general, before Erwin talks about the cultural context and historical developments which he argues are important to understand the development of early Austrian economics from its beginning in the late 19th century until the emigration of Austrian scholars in the 1930s. The interview also covers how Austrian economists adapted to their exiles in the English-speaking world and how modern Austrian economics differs from the approach used by Austrian economists in Austria. Towards the end of the interview, we discuss the challenges of writing a book that covers a large group of people, the endeavour of transforming a PhD thesis into a book published by the Cambridge University Press, and the role of historians of economic thought as the last generalists. Erwin is a post-doctoral researcher at the Erasmus School of Economics where he is working on the intellectual biography of Nobel laureate and Dutch economist Jan Tinbergen. He is also assistant professor in cultural economics at the Erasmus School of History, Culture and Communication and has been post-doctoral fellow at the Economics Department of George Mason University. His research focuses on the intersection of art and culture with economics. He has published in the fields of cultural economics, economic methodology and intellectual history, and he is currently working on the moral frameworks which sustain markets. And he is a co-host of this podcast.

Gareth Dale on the Life of Karl Polanyi, Episode 8

Guest: Gareth Dale, Brunel University Hosted and produced by Reinhard Schumacher In this episode, Gareth Dale talks about his biography “Karl Polanyi: A Life on the Left”, which has recently been published in paperback. We discuss Polanyi’s childhood and youth in Budapest, his move to Vienna after the First World War, his escape from Austrofascism to first England and later North America, where he would write his main work The Great Transformation. We also talk about Polanyi’s relationship with his wife Ilona Duczyńska and his brother Michael Polanyi. We end the interview with some challenges of writing a biography. Gareth is a social scientist and senior lecturer at Brunel University. Besides Polanyi, his research interests include the political economy of the environment, the growth paradigm, the history of East Germany, the political economy of Eastern Europe, social movement theory, and international migration. Gareth has been working on Karl Polanyi for more than a decade. His research has resulted in several papers as well as the following four books on Polanyi, which are mentioned in the episode: Karl Polanyi: A Life on the Left. 2016. New York: Columbia University Press. Reconstructing Karl Polanyi: Excavation and Critique. 2016 London: Pluto Press. Karl Polanyi: The Hungarian Writings [edited volume]. 2016. Manchester University Press. Karl Polanyi: The Limits of the Market. 2010. Cambridge: Polity Press.

The Mont Pelerin Society and the Origins of Neoliberalism with Ola Innset, Episode 17

Guest: Ola InnsetHosted and produced by Erwin Dekker and Reinhard Schumacher In this episode we interview the historian Ola Innset about his award-winning dissertation Reinventing liberalism : Early neoliberalism in context, 1920-1947. He has used the methodology of micro-history to study the first meeting of the Mont Pelerin Society in 1947, including 'juicy' details. We discuss Ola's thesis of the double movement: neoliberalism as response to both planning and the old ideal of laissez-faire. But the conversation turns much broader about the international character of neoliberalism, the uses and abuses of the term, as well as its contemporary relevance. And we discuss other recent literature on neoliberalism including that of Quinn Slobodian and Peter Boettke. In a piece for the Baffler Ola has described his own visit to the Mont Pelerin Hotel where the conference took place.In a spin-off article has has explored the relations between Friedrich Hayek and Karl (!) Polanyi, which contains a continuation of the discussion about economic calculation in the podcast.