Humanity hangs in the balance. War and enslavement. Freedom and magic. Two elven families fight to control humans. Across the land and over the sea, Estus Arrenkyle claims his secret magical heritage. The sea captain, the secret wizards of the theater troupe, the angry fighter, the elf, and the quiet carpenter come together to reopen the world's eyes to the magic that waits within us all.
(Episodes marked Explicit for: Mild language, battle scenes, romantic and religious themes.)
...more 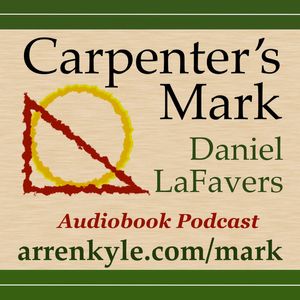 Estus as a child explores the forbidden forest and spends time studying with Mirella and Jorel.

Petran Vendack discusses the stolen gold with Victor and Andor Tol-Tolin. Estus returns home to find Carmen injured. Gareth visits the Broken Wing pub. Bodie meets Adrian, who helps with a difficult problem. The sailors leave the pub and have to change their plans.

Ivy Del-Gesius arrives in Kelebor. Baron Arrenkyle and Petran Vendak discuss the rebel attack. The sailors adjust to their new situation. Gareth has to rely on his sea skils to save himself.

Baron arrives in Kelebor and remembers when Carmen and Estus met. Baron visits with Estus, and old habits are rekindled. Ivy watches Estus at the funeral. A Gelst family visits and struggles with the Teshon regulations. Kessel Tol-Rena gives the Gelst Harvest Benediction. Estus leads the Kelebor service.

Gareth has a private Harvest ceremony and gains a new perspective. The sailors help with a ceremony for the new captain. Estus meets Ivy at the church. Adrian is abandoned in the woods.

Estus improvises during his first communion. Gareth returns to the Broken Wing pub and finds a new mission. Estus prepares for his journey and visits with an old friend.

Hannah has news for her father and gets news from Peter. Darla and Katie prepare a shipment of lumber in Merebor. Glen helps with a fire in Boret.