Original drama and stories created for the world of audio by Josephine Halbert, an artist and filmmaker. Brought to you by Told In Pictures. Imagination is free.
...more 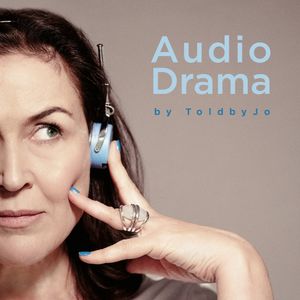 Promo for audio drama, Jim, the story of a transatlantic rock and roll romance between a famous American rock star and aspiring English writer, set in 1968. This excerpt is from the Desert Drive Scene when Jim takes Laura for a drive to visit a canyon near Palm Springs.

Jim is a fictional story of a transatlantic rock and roll romance, set in the late 1960s, against the backdrop of the psychedelic counter cultural scene.

It's the muse's story, told to us by Laura, who remembers her love affair with Jim, a famous American rock star, who she met by chance while visiting Palm Springs in the spring and summer of 1968 when she was a young aspiring writer. We follow their romance over a series of their meetings that take place in California, at her home in London and in Copenhagen during that summer when Jim, at the height of his fame, is touring Europe with his band and Laura has started her first job on a happening British magazine.

In a world that Laura knows nothing about, she finds herself embarking on an intense relationship with Jim, who has now grown weary of the trappings of his meteoric success and together they envision another life, pursuing their love of poetry, self discovery and freedom.

Jim was written and produced for radio with music specially commissioned by the author and evokes a different era, the late 1960s and the counter cultural revolution which inspired a generation. But it is a timeless story about the mystery and adventure of being young and falling in love, and the experience of those early emotional awakenings.

The play is performed by actors Charlotte Quita Jones and Cesare Taurasi. Sound design is by Michele Woods and it was recorded at dsound Studio, London in 2015 by Dave Morritt. Jim is a Told In Pictures Production and is written and directed by Josephine Halbert. The music is composed and performed by rock band Desert Mountain Tribe and includes additional music by Arthur Young. The music was recorded in the UK at Shaken Oak Studios in 2014, and is produced by Ammadore Records (2016).

The Jim promotional soundtrack award winning music video, Never Stop (Live Version), features the original recording of the live version of the love song Never Stop performed by Desert Mountain Tribe's singer/songwriter Jonty Balls. It includes footage of dramatised scenes inspired by the story starring the actors who play the roles in the radio play. The music video premiered at the Santa Fe Film Festival in 2016 where it won Best Music Video and has enjoyed further success on the international film festival circuit, happily picking up more awards. The love song Never Stop was written to a brief to create a classic love song that the story's hero writes for the heroine, a song 'everyone wants to hear' - the song received an award from the 2017 Global Music Awards.

You can watch the award winning music video at: https://youtub/be/_DqqfPkGBQs

The soundtrack, Jim EP 'a radio play by Josephine Halbert with music by Desert Mountain Tribe' is available to download on Apple Music / iTunes at https://itunes/apple/com/gb/album/jim-ep/id1176914932

I want to send a very big thank you to any listeners who would take the time to hear my play! It is my first, my debut, audio drama and creating it has been an adventure and I have learned a little. I look forward to sharing more productions and learning a lot more and especially look forward to discovering the exciting and infinite world of audio drama and podcasts out there! All, listens, comments and reviews are very welcome and appreciated!