The Art of the Reset is a podcast devoted to helping you reset your life and business. Whether that means pivoting your business and brand in a new direction or a complete (or partial) life reset, we’ll help you get unstuck, re-inspired and moving forward with renewed passion and zeal. This weekly podcast is hosted by author and keynote speaker Ann Sharpsteen.
...more

Top 10 Art of the Reset Episodes 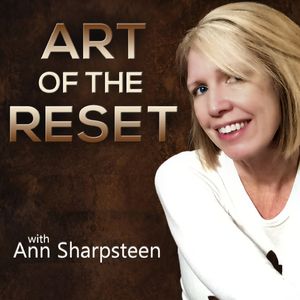 Ann Sharpsteen chats with fitness instructor and author of "Happy You Happy Body" Karen Jones about her struggles with depression, weight loss, and healing from a toxic relationship.

Cliff Ravenscraft: Take Your Life to the Next Level

Ann Sharpsteen chats with world-renowned business and personal coach Cliff Ravenscraft about strategies and practical advice to take your life to the next level.

9 Steps to Living an Inspired Life

Ann Sharpsteen discusses 9 Steps to Living an Inspired Life on this episode of the Art of the Reset podcast.

If you've ever felt like you haven’t quite figured out your life’s true calling you’ll want to listen to this interview with Dan Cumberland, whose business and life mission is helping people find their calling and meaningful work. Have a listen to today’s interview, but also be sure to check out Dan’s blog at www.themeaningmovement.com, and loads of resources he makes available. One of my favorites: a few mini-course "The Calling Course" that will help you get started in finding your calling (www.thecallingcourse.com). Enjoy! Ann

In today’s episode, I chat with rock-star TV meteorologist Dave Freeman who, after a successful forty-year television career, is choosing to retire and now “reset” his life. He shares how he’s dealt with the challenges he’s faced throughout the years, and how he is now embarking on a new adventure that will take him (and his wife, Tracy) over to the Middle East to answer a higher calling to serve people in a whole new way. I met Dave in the early 90’s when he and I both colleagues and worked at KSNW-TV in Wichita, Kansas. Before that, he worked as an on-air meteorologist in Ohio, before taking over as Chief Meteorologist at KSNW. The Wichita market, by the way, is known in news and weather circles as the “Super Bowl” of markets for severe weather. Dave was responsible for keeping people safe across seventy-seven counties and two time zones.... quite a feat! He was also on-air during the horrible May 4, 2007 Greensburg Kansas tornado that destroyed 95% of the town and killed 13 people. Take a listen and enjoy this time spent with Dave Freeman, one of the most beloved and accomplished TV meteorologists of our time.

In this week's episode, I talk with legendary and award-winning director Jon Small about his 40+ year career and astonishing success in the entertainment industry and life lessons learned along the way. Jon shares stories of working with Garth Brooks, Billy Joel, Johnny Cash, the Beach Boys, Miranda Lambert, Blake Shelton, Sting, as well as The Beatles, Joan Jett, Martin Scorsese and more. It's a fascinating life story to hear and learn from.

In this week's episode, I talk about the #1 best-seller, Miracle Morning by Hal Elrod and the genius advice and suggestions contained within it. I also talk about my Philips Hue LED home lighting system and how it has ridiculously changed how I (happily now) wake up in the morning. Mentioned In This Episode: How to Make Bulletproof Coffee with Dave Asprey Infographic: Regular coffee vs. Bulletproof Coffee Dave Asprey Bulletproof Radio podcast Episode #403 – Climb Everest in a T-shirt & Shorts. Survive Subnersion in Freezing Water for Hours. Wim Hof Tells You How He Did it. How to Hack Your Sleep: The Art and Science of Sleeping

*If there were any additional resources that I mentioned in this episode that you do not see listed above, please send me an email and I’ll update the show notes.