Make An Impact Podcast is the podcast for you if you're a social entrepreneur or purpose led business owner, or desire to be one, and want to be inspired to make a bigger impact on people and the planet.Heidi Fisher MBE talks to social entrepreneurs who have set up all kinds of enterprises, and finds out more about how they are successfully running their social enterprises, and making a positive impact in the world.In the conversations you'll find out what they are doing so you can develop your social enterprise using their practical tips, why they do what they do, the impact their social enterprise has and how they measure their impact, and more.There's also exclusive interviews with Heidi where she shares her tips and knowledge around social enterprise and impact measurement.#socialenterprise #impactmeasurement
...more 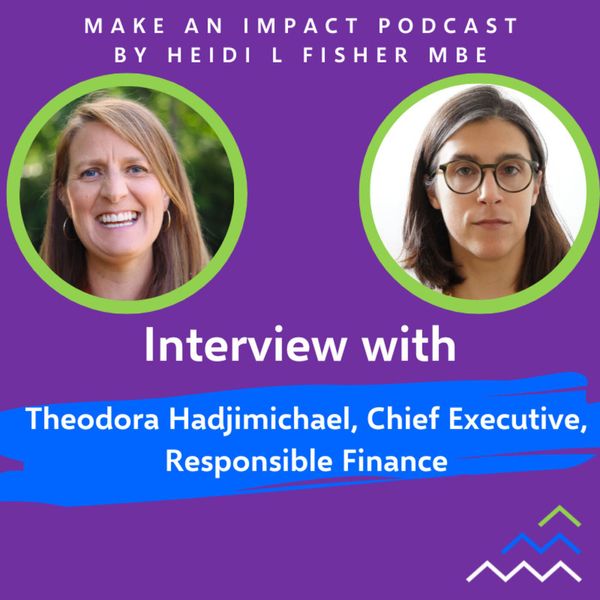 Money where it matters with Theodora Hadjimichael, Responsible Finance

Finance and credit play a big part in our lives. Removing or preventing access to them is hugely disruptive, as today's guest explains.
Without fit-for-purpose finance on fair terms, businesses and social enterprises can't grow, create jobs or deliver vital frontline services, and millions of households are prey for loan sharks.
Community development finance institutions (CDFIs) address the damaging lack of appropriate finance faced by many people, businesses and social enterprises. Responsible Finance represents CDFIs, and CEO Theodora Hadjimichael describes the uneven financial landscape in the UK, and: 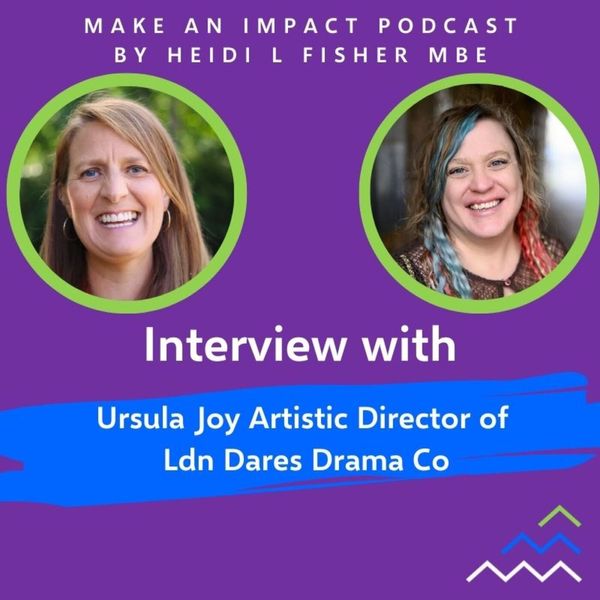 We have never faced such scrutiny of our bodies, or been under as much pressure to conform to a narrow definition of 'beauty.'
Ldn Dares Drama Company supports people with low confidence, self-esteem and body image issues through performing arts.
The social enterprise works with commissioners in mental health. It helps people develop and understand their self worth, build confidence and more, and has been nominated for the Innovation in Healthcare Lammy Award.
Founder and CEO Ursula struggled herself for a period with her own mental health and talks us through what its 'dares' involve, how it measures and manages its impact, and how its varied progammes help people grow in confidence and self worth and create community value.
What's an immersive treasure hunt? How do challenges and performance build confidence, self acceptance and behaviour change? How is Ldn Dares led by participants in some of its sessions? What sort of changes does that lead to? And how does it translate its impact in terms in building participants' confidence in its programmes, workshops and sessions into their day-to-day lives? Listen to find out.
Links: 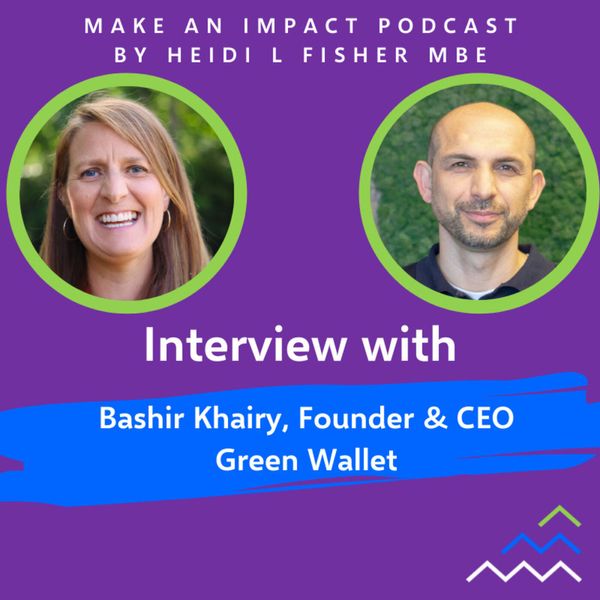 When serial technology entrepreneur Bashir Khairy had a lightening bolt realisation of the cumulative effects of our shopping habits, he overhauled his lifestyle.
But there was a problem. Bashir and his family couldn't find enough sustainable products in one place. "There were fundamental questions about how we vote with our money," he says, and directed his focus to creating a marketplace featuring ethical products from conscious merchants.
The Green Wallet app is now in use UK-Europe wide making it easy for social entrepreneurs to access conscious customers. Bashir and his team of tech enthusiasts have also launched a payment processing gateway, and plant a tree every time they process a payment. With 35 billion transactions processed online in the UK alone last year, that could be a lot of trees.
Bashir, founder and CEO at Green Wallet, is a former officer with the UN High Commissioner for Refugees, and ran a substantial portfolio at BT Wholesale. Heidi was so impressed with Green Wallet's services (and its forthcoming launch of ethical banking services, something she is asked about frequently) that Make an Impact and Green Wallet launched an exciting partnership this month. In this episode Heidi quizzes Bashir about:
• How Green Wallet came to be
• Bashir has committed to planting a billion trees – that sounds like a lot! How will they get there, and are Bashir and team really planting that many?
• Is planting a tree the only solution, and does it accurately reflect the carbon involved in a transaction?
• The biggest highs and lows in the business so far
• How the team recruited its tech experts
• The new partnership and how Make an Impact podcast listeners can benefit and enable hundreds of trees to be planted every year – what a fantastic way of harnessing technology for good.
What next?
• For more information visit www.greenwallet.com/paymentprocessing Use the code IMPACT to enable 10 trees to be planted on registration and a halved commission fee for the first 6 months if you sell in the Green Wallet marketplace.
• More about Heidi's work at https://www.makeanimpactcic.co.uk 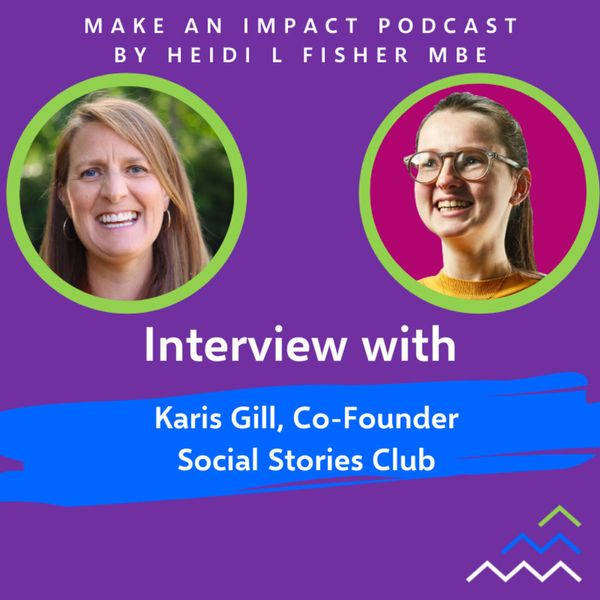 Karis Gill was already a serial entrepreneur when she discovered social enterprise. She figured gifts are a wonderful way to introduce people to what she, like Heidi, believes is the future of business.
Social Stories Club, a social enterprise Karis co-founded, offers gifts (wonderful products which make a difference) accompanied by engaging, powerful stories.
Karis describes how it maps and manages its impacts; how it uses stories; and how she and her team decide what products to include.
The business gives opportunities to people with barriers to employment and is going from strength to strength – but how did it weather the storms of the pandemic, an enormous fall in orders from corporate clients, and a cardboard packaging shortage? Karis explains and tells us the story of Social Stories Club.
Links: 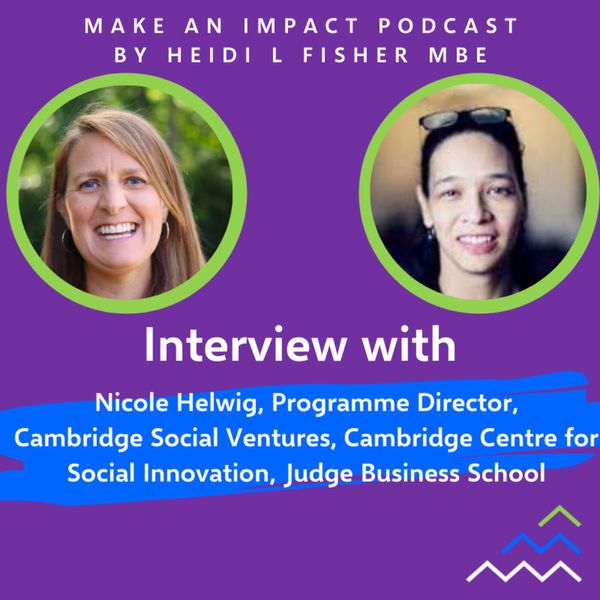 Propelling unsung heroes to even greater impact with Nicole Helwig

Does your work create social change and are you an extraordinary business leader? If so, you could apply for the Cambridge Social Innovation Prize, which offers a £10,000 cash award to up to four winners for their personal and professional development alongside expert mentoring support.
It's an exciting opportunity to accelerate your impact and today's guest Nicole Helwig explains more about the Prize, its purpose and impact, how to apply, and gives a vital piece of advice if you're thinking of applying.
Nicole took up her role as Programme Director, Cambridge Social Ventures in the middle of the pandemic. What was that like, and how does Cambridge Social Ventures measure its impact? What programmes and support does it offer social innovators and impactful business leaders and how have these evolved? How did Nicole and colleagues ensure the "moments when the magic happens" weren't lost?
Nicole also explains how she become involved with social enterprise, why she wanted to lead Cambridge Social Ventures, and reflects on social enterprise ecosystems and innovation with an international perspective (Nicole was brought up in Newfoundland).
From ballet to business for social change, via Canada, South East Asia and Cambridge: Nicole is a fascinating guest for season 5's first episode.
Links: 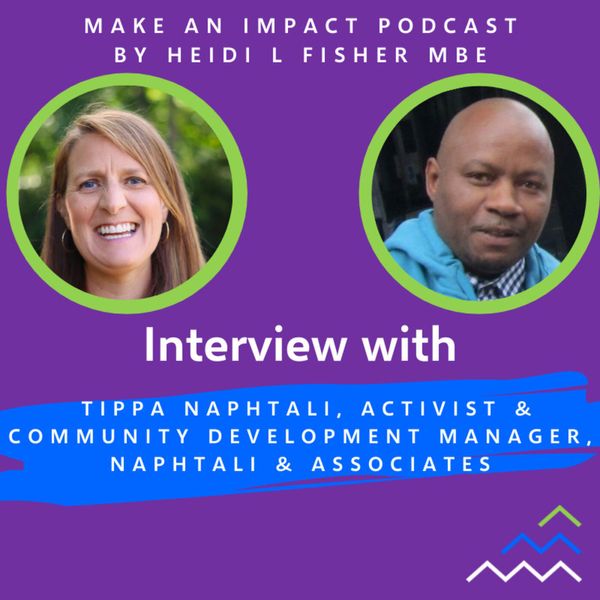 Tippa Naphtali doesn't only use enterprise for business, but also to address political and social issues and make society better.
He's been a community activist for over four decades, working in Birmingham, London and internationally. Entrepreneurial since the playground he's supported, developed and led a huge range of community development and social justice projects and organisations.
Tippa is well known for his campaigning work, calling for penal, police and mental health reforms to end deaths and abuse in custody, wrongful convictions and torture. Tippa's cousin, Mikey Powell, died in police custody having been failed by multiple agencies. Tippa explains how he's worked with some of those agencies to influence and bring about real changes.
One of Heidi's oldest friends in the sector, Tippa gives a riveting interview. This episode includes shocking, distressing content which must never be ignored alongside inspiration, laughter, hope and real impact. Tippa's entrepreneurial activities power and support his work in mental health, with food banks, and in social justice. Tippa's ability to get things done and influence change continues to inspire Heidi and many people and organisations.
Links to websites and resources mentioned in this episode: 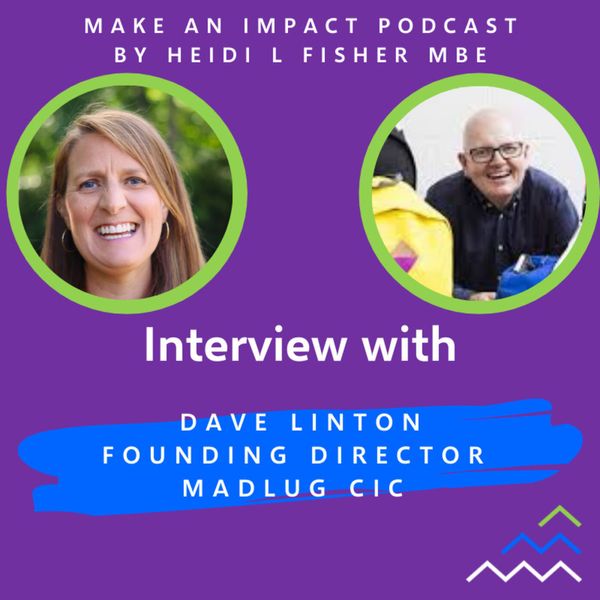 Dave Linton is the first ever guest to be invited onto the Make an Impact podcast for a follow-up interview. He launched Madlug in 2015 as he was heartbroken to learn that most children in care transport their worldly belongings in bin bags. Madlug’s 'Buy one, give one' approach addresses this.
But what’s happened since Dave was last on the show? Masses, it turns out, and Dave describes Madlug’s resilience in the face of a social media hack, the decisions it made to deal with Covid, the value and importance of a great board, the importance of trusting your gut and how he and his crew responded to an astonishing phone call from IKEA.
Dave also gives his KEY advice to help social entrepreneurs find your niche and avoid mission drift. It’s a powerful tale of a social enterprise which started with just £480 and is making an astonishing impact.
What next? 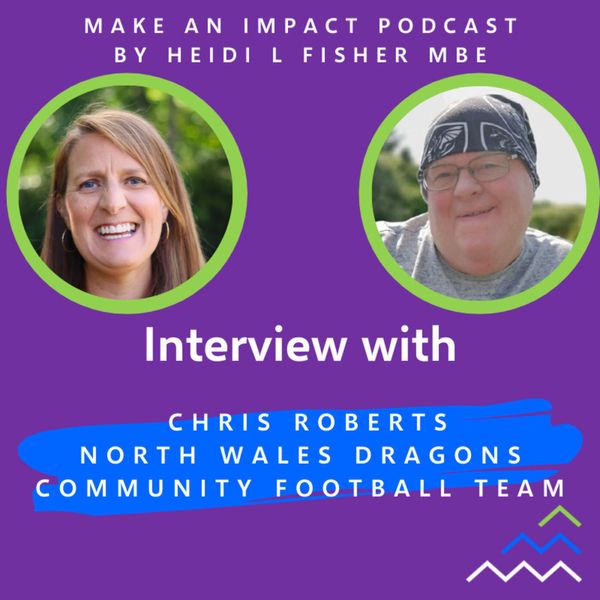 "This is a model that can be taken anywhere in the world." Chris Roberts is the co-founder of North Wales Dragons, a social enterprise and community football team which raises money for charities all over the UK and beyond.
The idea was kicked off with a football match with a ten-nil defeat, but lots of money raised – and it snowballed from there, as Chris explains. He also describes:

This interview also covers how Chris levered the connective power of social media during the lockdown to make connections with other people making an impact, all across the globe – and "spread the name of the Dragons worldwide." 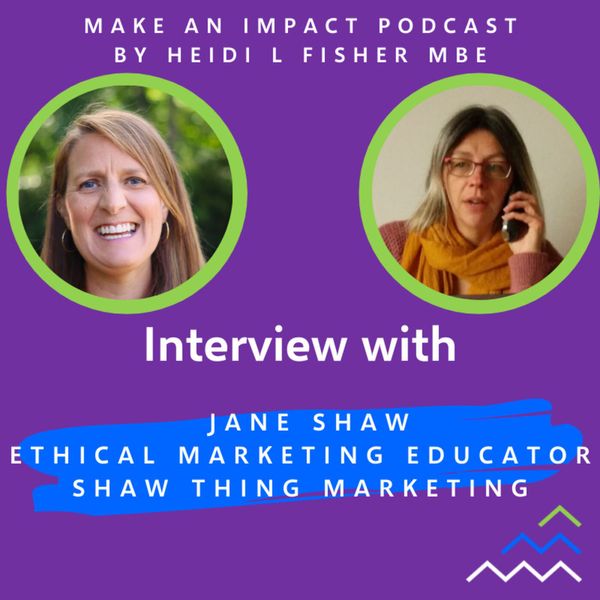 There are three key things ethical businesses must do when it comes to their marketing, according to Jane Shaw. Listen on to find out.
Conscious customers can be incredibly vocal, so if an ethical business can build a community which loves and believes in their product or service it can be a huge asset.
Jane describes the practical steps ethical businesses can take; how she helps entrepreneurs to bottle their "why" and her own routemap to make marketing affordable and effective for small, purpose-led businesses.
A former journalist and PR, Jane also runs The Happy Families Plan , giving families the tools to stop surviving and start thriving.
What next? 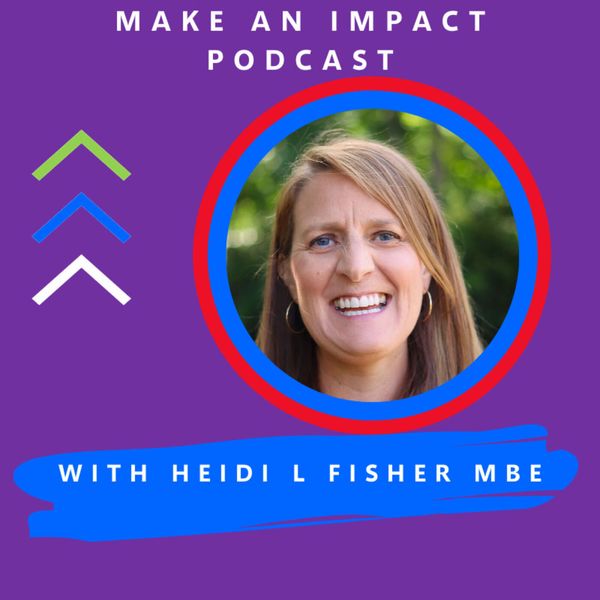 There are six million dads in the UK and when Dan Flanagan's own father passed away he re-evaluated his own life. "It can be lonely to be a dad but men don't like to talk about that."
The consequences are profound and tragic. Isolation, loneliness, mental ill-health. For some men, suicide – horrifyingly, 96 men under 45 are lost to suicide each week in the UK. And the emotional availability of fathers has both an immediate and long-lasting impact on children.
A few years ago Dan started blogging about fathers and parenting and – to his great surprise – his posts became hugely popular. They resonated with many men who were frustrated they couldn't share their feelings with others, suffering in silence, or struggling with stereotyping.
He launched Dad La Soul, a "revolutionary grassroots movement that uses art, tech, music and play to battle social isolation and loneliness." The more we can do to get dads talking the better, he says.
Dad La Soul is a not-for-profit community interest company. It's now globally recognised, has been mentioned in the UK's parliament and featured in numerous media articles.
Its impact report has unlocked numerous opportunities for the social enterprise, and been recognised as an exemplary piece of storytelling and impact communication.
Dan tells Heidi how he came to launch and develop Dad La Soul and build communities where dads support each other.
He describes how it has worked with many organisations, from football clubs to social housing providers to local authorities to big brands – but it's also turned down numerous partnerships if they weren't right.
And he covers how he shook up impact reporting by necessity.
What next?