Economists say the way we work has become so stressful it’s now the fifth leading cause of death. Our mission is to find a better way. Explore the art and science of living a full and healthy life with behavioral and social science researchers who can help us better understand what drives our human experiences, and how to change. Better Life Lab is a co-production from New America and Slate.
...more 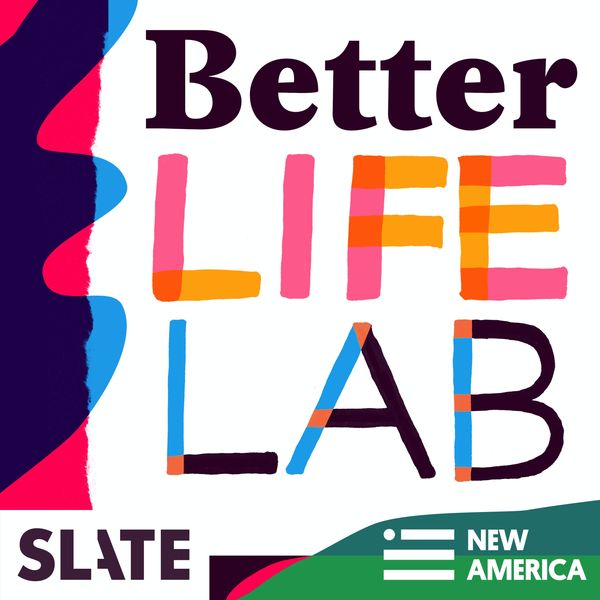 Research shows that egalitarian couples who fairly share work and home responsibilities are happier, healthier and have better sex. But are egalitarian partnerships really possible, especially when U.S. work cultures demand all-out devotion and women still carry the load as primary caregivers and household managers? We hear stories from workers striving for that egalitarian ideal: An Ethiopian immigrant nurse and Uber driver, A military “trailing spouse” with big dreams. And Amy Nelson, founder and CEO of The Riveter. To make sense of why egalitarian relationships can be hard no matter your circumstances, we hear from Jennifer Petriglieri, professor of organizational behavior and author of the forthcoming book, Couples that Work.

While an unpredictable schedule has always been a part of a restaurant worker’s experience, the advent of scheduling technology and the pressure to keep labor costs low has turned the schedules - and lives - of restaurant and retail workers upside down. We hear stories of waitstaff and big box retail workers from around the country. Joan Williams, Director of the Center for WorkLife Law at UC Hastings, shares research on how predictable schedules not only make life better and healthier for workers, but actually makes businesses more profitable.

In a famous 2007 talk at Google, productivity guru Merlin Mann introduced the world to Inbox Zero, his idea of managing the raging river of digital overload. But is such a high standard even possible today? In this episode, we explore Email Mindset, and how to think about your inbox. And we compare Mann’s Inbox Zero approach with writer Amy Westervelt’s Inbox 100,000.

You’ve heard of work-life conflict, but when one Stanford researcher looked into how doctors managed it, she discovered another complicating factor: work-work conflict. It's having so many different tasks and responsibilities at work that you can quite literally feel pulled in a hundred different directions at once. We hear the stories of a doctor, a nonprofit executive and a home health aide, and how real solutions will require systems change.

When Jason Fried founded Basecamp, he and his partner decided not to focus on growth, but on sustainability, and healthy work-life balance. While Fried’s stance is unorthodox in an economy where success is literally measured by growth, economist and bestselling author Juliet Schor says Fried is onto something.

Better Life Lab is back! In Season 2, join host Brigid Schulte as she explores the torture of "Inbox Zero", work schedule chaos, and the Japanese idea of "karoshi" — a sadly common phenomenon where people work so hard they die — and much more. The Better Life Lab podcast from Slate and New America will show you why work-life balance seems so unattainable for so many people—and what we as individuals, as organizations, and as policy makers can do about it. New episodes drop March 15, 2019.

The Surprising Reason Why the Gender Pay Gap Hasn’t Shrunk

It gets more intense every year — the drive to work longer and longer hours. And there’s striking new research that shows that women, who already get paid less than men, are put at a distinct disadvantage by an American job market that rewards overwork rather than performance.

In the final episode of season one of Better Life Lab, we hear from Youngjoo Cha, a sociologist at Indiana University and an expert on overwork and gender. Her research shows that, while the education gap is closing between men and women, overwork has all but cancelled out efforts to equalize the job market. In fact, the gender pay gap would have actually shrunk by 10 percent in recent decades if it wasn’t for this phenomenon.

Ciannat Howett, an associate professor at Emory University, shares her own story of job growth and overwork.

Better Life Lab is a partnership of Slate and New America.

No meeting Wednesdays and work from home Fridays are not enough.

Why You’re Addicted to Being Busy

Email inboxes and push notifications were designed to keep us busy. But when we break it all down and how we think about busyness, we should be paying attention to the way our environment is designed — both at work and at home. Behavioral economist Dan Ariely explains how we can change our surroundings and our actions to fight our addiction to being busy.

Ariely is an author of The New York Times best-selling book “Predictably Irrational,” a popular TED speaker, and professor and director of the Center for Advanced Hindsight at Duke University. We also hear from David Sbarra, a professor in the psychology department at the University of Arizona, where he directs the Laboratory for Social Connectedness and Health. And he confesses — he is obsessed with busyness.

In Japan, workers are so used to working punishingly long hours that dying from overwork is a common phenomenon: so common, in fact, that victim families can and do routinely apply for worker compensation benefits. We hear the stories of Japanese workers caught up in a system of overwork, young activists trying to change things on the ground, and a professor trying to make sense of it all. Is it just a Japanese phenomenon? What can Americans learn from a culture of overwork?

This episode is brought to you by Constant Contact. For a free trial, sign up today at constantcontact.com/lifelab.